Trivia: Robin learned to speak Russian for the film within a month and studied 5 hours a day

Plot: A musician from Russia defects to the United States and settles in New York with the help of Bloomingdale's employee 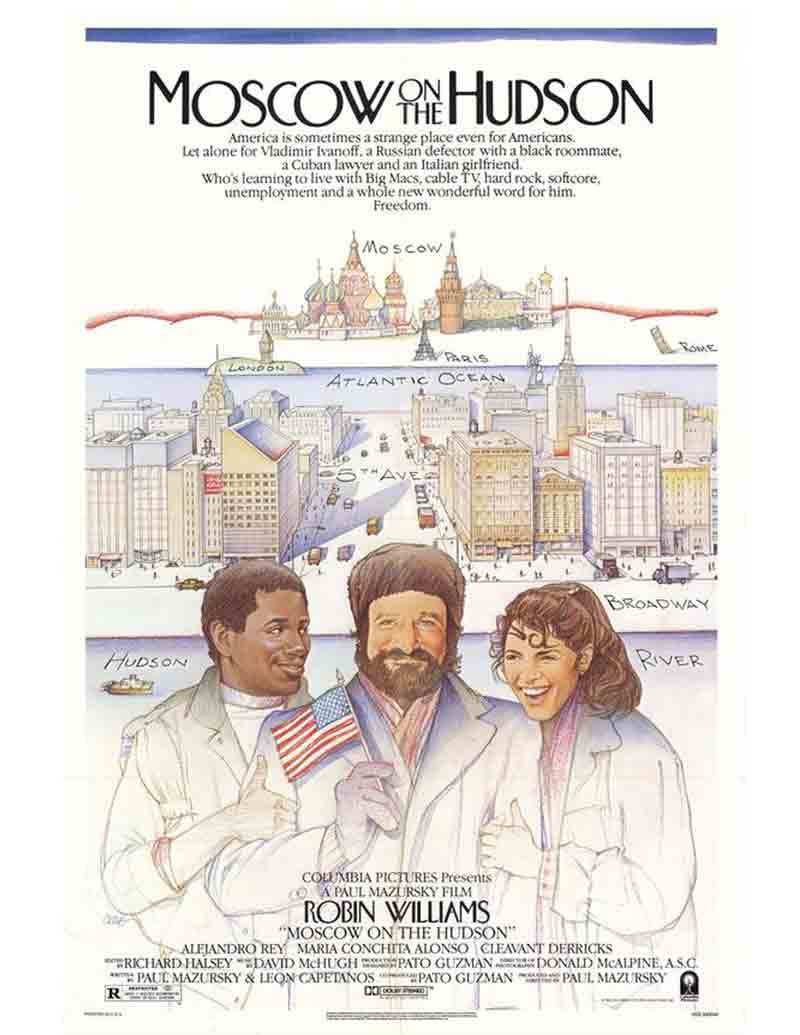 A Russian jazz musician leaves his homeland and transfers to the United States of America in this story of the American dream and making the fullest out of one's experience. During his visit to the Big Apple, he decides to defect for good. The rest of the film sees Vladimir's attempts at assimilating into the American culture and lifestyle, and with that, he meets some new people, makes friends with them, as well as fall in love.

Robin Williams's performance as Vladimir in Moscow on The Hudson is the unlikeliest you have come across but after seeing this film, you'd truly understand how he succeeded in verbally grasping the Russian language. Yet it's a pity that besides his fluency in Russian, I never truly knew the real Vladimir, characterization-wise. For all I know, based on this movie, he is just a Russian guy.... and that this so-called human interest film isn't all that it's cracked up to be.

This is more or less an observation of the immigrant experience, but the portrayal it paints is not very interesting, nor as insightful as one expects it to be. And though it is billed as a comedy, it feels more like a drama, and a stale one it is too. The film kind of begins well with promise, but as it progresses, it goes awry and gradually falls apart bit by bit, very slowly and in doing so, it never fully regained my interest.

There is a story lying here about being an immigrant, of going to a foreign land and trying to make something of yourself, but the director and writer never seemed fit in deciding and knowing how this ought to be conceived. A couple of the plotlines appear to go nowhere.

The version I watched had practically no subtitles, and so I couldn't understand, nor barely make out what they were saying in Russian; therefore, I was watching people speak in Russian without any inclination of what it meant and just let the dialogue go over my head. Therefore, this didn't help but slightly acted as a hindrance to the viewing experience.

Robin Williams's grasp of the Russian language is very, very impressive and he had to learn it during a crash course session in preparation for the role, as is his saxophone playing; I would have loved to have seen him play another character who speaks a foreign language especially, as Robin himself was highly fluent in Spanish, French amongst a few other languages. And yet it's a shame this never happened very often, right after Moscow on the Hudson (although he did do this in Jakob The Liar). Seeing bearded Williams being capable and restrained in his role was another early dramatic performance and only his second dramatic performance in The World According to Garp. Compared to Garp, it is a teensy bit interesting as a film, but the sex scenes, though more how they were played out in Moscow On The Hudson, just ruined it for me.

This is also one of the very few films where he has his kit off and yes, he is very hairy. I think this movie was just a feeble excuse for Robin to take his clothes off, with the storyline/narrative being extremely confusing and not making much sense, and the rest of the movie is superficial and as interesting as watching paint dry. If you're going to have a character with his/her clothes off, there has to be an explanation and context for this rationale. Otherwise, it would be like staring at some naked guy or woman who got undressed, for no particular reason. But it appears as though the awkward looking sex scenes in this film were inconsequential -, to the point being that despite its existence, they barely aided the story. That they were there because the writer and director had to throw them in to draw in larger crowds. Additionally, there were periods where next to little was happening, that little was being said by the characters and the narrative was just plain dull.

Maria Conchita Alonso was all right as a perfume clerk at Bloomingdale's but the chemistry between herself and Robin Williams was somewhat, odd and mismatched as a couple; despite their promising meet-cute scenario, it felt forced and didn't feel genuine enough. The sex scene in the bathtub - one of the few misfires of this movie- didn't do much for me, either; not that I found it distasteful or that I am a prude, but that scene alone made him look like a pervert and was tawdry and wholly discomforting to watch. Robin Williams has been involved in various love scenes throughout the years during his acting career, but this one, alongside the one in The Best of Times, was squirming and was not particularly sexy.

It felt as those two fell for one another, it sort of happened without any real build-up to it and back to the Robin Williams being too hairy part, I also think it would have been ideal if he had his upper body shaved. The scenes with Vladimir and Cleavant Derricks' security guard Lionel, however, making small talk, were nice to see. I also liked the scenes where Vladimir bonds with Lionel's family members. The interesting thing I found about this film is that in characters Vladimir, Lionel and Lucia they are all minority characters - Vladimir is Russian, Lionel is African- American and Lucia is an Italian. Individually, Williams, Alonso and Derick each perform well, but as impressive as their performances are, the movie never really peaks and it comes across as being rather bleak in its execution. I was genuinely surprised to see that for all the talk, Vladimir is not interesting enough as a character & the film didn't try to make efforts in doing so. Although there were instances when the film finds its feet and when it does so, I enjoy them.

30 + years on, it still looks good to this day, and yet for a film billed as a romantic comedy/dramedy, there are very few laughs to be found, and not least as it doesn't follow through all the usual tropes of romantic comedies, properly. It's not really a comedy, but neither is it much of a rom-com. My initial response when I went into this film was one where I didn't and wouldn't really care too much for it......having now seen this movie, my views have slightly differed in a way, but the story is still not as enticing as it ought to have been.

In all, Moscow on The Hudson is unimpressive and partially a shallow attempt of a movie about the immigrant experience. 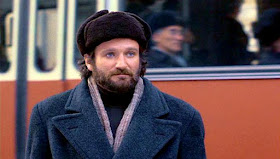 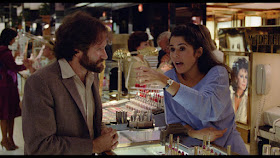 - Robin Williams's mastering of the Russian language and restrained performance

- The scenes with Vladimir and Lionel's family bonding together are nice

- Robin Williams is too hairy in this film

- The sex scene in the bathtub was slightly too gratuitous, as well as tawdry

- Characterisation of Vladimir utterly absent throughout

- The coming together of Vladimir and Lucia came across as being forced; that and they are mismatched as a couple

- Lack of humour for a so-called comedy

Unfortunately, just like with many of Robin's post - 2000 efforts, the director of this film must have thought that by slapping on the name of Robin Williams, they can disguise any old thing, as poor as this and try to pass it off as a great movie. When virtually, in this case, it is anything but a great film.

The main problem with Moscow On The Hudson is that despite some of the interesting characterisations, there seems to be an underlying theme, based on freedom, what it means and how it is defined through the eyes of the characters, - and yet that theme is never made out what it is or what it is supposed to be. Sure this is a film about the immigrant experience, but the actual story of the film lacks potency, is never explored properly and there aren't enough interesting moments within it, either.

It could have worked better as a parody perhaps, but for all of Robin's acting efforts as well as that of the supporting cast, when it tried to veer more towards a meaningful commentary on American life, the movie just fell flat. But even when it tried to be meaningful, it just came across as being too monotonous. Yet for a film that is also billed as a romantic comedy, Moscow On The Hudson pretty much fails in this respect too, as it doesn't follow up its tropes and genre structure.

As much as I love many of Robin Williams's movies, this one, unfortunately, is very forgettable, not very memorable that not even the unimpressive sex scenes themselves, can save this film from mediocrity.