Can I Do It... Til I Need Glasses?
1977
Cast: Robin Williams, Ron Jeremy, Angelyne, Thelma Pelish
Genre: Anthology Comedy

Can I Do It... Til I Need Glasses is a film Robin Williams wishes he had long forgotten about, a film he wants nothing to do with, and one he'd wished he'd never been involved in in the first place. But hey, Julia Roberts appeared in a similar film to this one, as a unaccredited cameo role back in 1987 titled 'Firehouse' about a trio of females, who join a fire -fighting brigade: a campy, low-brow sex farce that draws similarities to the British Carry On films, and look where it took her. And I guess the same can be said for Robin with this offering. Sort of.

And it's consistently unfunny and not very appealing as well.

Can I Do It... Til I Need Glasses is the follow-up to 1975's ''If You Don't Stop, You Will Go Blind'' and is somewhat notoriously touted as Robin Williams's' so-called infamous onscreen debut appearance, it is nothing more than a sex comedy with no plot to speak of, whatsoever but plenty of terrible dirty jokes and innuendo, some softcore nudity and random sketches that are no funnier as the producers/makers have billed it as. The set-up and punch-lines evoke more on the lines of groans than genuine laughs. They seemed to have been cobbled up together with no purpose of telling a story, nor how they are intrinsically linked together. Its structure is similar to that of the Carry On TV series that aired in the 1970s or 1980s where it had short 5-10 min sketches.

Some of the jokes are also in awfully very bad taste and do not evoke laughter or amusement, one bit. For example, a man opens the door and there is a man with a bag over his head holding a gun. The guy who opened the door goes ''Oh s***, a burglar!'' and the other guy, who appears naked with a bag on his head replies with, ''I'm not a burglar, I'm a rapist!', and the guy who opened the door yells to his wife ''Honey, it's for you'' 😒. Sorry to bother you, but though one can make jokes on almost any subject in comedy and still get away with it, the one subject you cannot joke about is rape. If you think jokes about rape and being raped is a laughing matter, then I suggest you ought to take a good long, hard look at yourself.

The jokes, in general, are very old-fashioned that goes back to the 1960s or even further when comedy was raunchier and that skits about sex were a thing of the past. Yet as I was sitting through this film, not one scene was funny, nor did they make me laugh and the humour comes across as so cheap, tawdry and forced.

Much was made about the inauspicious debut of Robin Williams, one year before he made his name with the Mork and Mindy sitcom series. The courtroom skit that he was in, in all fairness, wasn't good; thus-forth I didn't smile. It was also not included in the initial release, but after the success of Mork & Mindy, the makers/DVD distributors wanted to capitalise on/take advantage of Robin's success and spread the word out by adding that skit to the DVD set. Much to his chagrin. Appearing as a lawyer in that short and unfunny 2 min or so skit, Robin later sued the filmmakers for misusing his name and image in association with this film.

Other than Robin's inauspicious onscreen appearance, there is virtually nothing else left to see. Thus, moving along..... 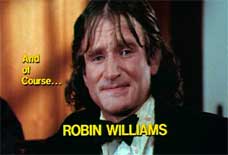 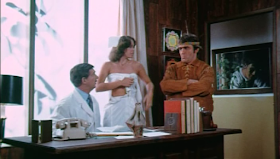 - Seeing Robin Williams in this

- Seeing Robin Williams in this and understanding why he hates it

- Nothing funny about joking about rape

If you like dirty, racy jokes, then this will be for you; otherwise steer well clear. There is nothing else to see, and that's by excluding the name and appearance of Robin Williams. This is deservedly forgotten and isn't and nowhere a masterpiece, though quite frankly, being the type of film that it is i.e. a sex comedy, whoever said it was.

''Can I Do It....?'' is nothing but a bundle of low-grade unfunny sketches, lame and corny humour and low- brow jokes, which become less amusing after several viewings.