Plot: A mercenary with a chip on his shoulder, Karl Thomasson poses as a teacher at an inner city school to exact revenge on the gang members who murdered his brother 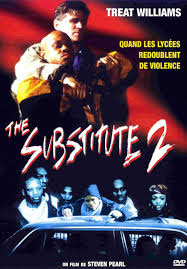 'B- Movie Action Equivalent To Dangerous Minds That Isn't Too Bad'

A B-movie version of Dangerous Minds mixed with a crime film, The Substitute 2 School's Out is the direct -to- video follow-up to 1996's The Substitute, starring Tom Berenger as a cop posing as a teacher to help nail a criminal.

After a fellow teacher is gunned down during a carjacking and drive-by shooting in broad daylight, his brother takes matters into his own hands as ex- mercenary now turned vigilante, Karl Thomasson infiltrates the school, in search of the killer who murdered his brother by going undercover as a teacher. Thomasson is the person who doesn't try to hide behind who he is and in the role of the teacher, he comes across as being well spoken and can gain and maintain the students' attentions. But he does so in a not so cocky, I- know-It-all kind of way.

The Substitute 2 has a basic and not very interesting plot, it's practically the same as the previous film, a rehash in fact. But this one remains entertaining, thanks to Treat Williams. His performance is the best one out of the main cast by far and is the difference to this film being a somewhat good one to a mediocre one. He is one of those actors that gets lumbered with B-movies in really interesting roles, yet is thrust in at times, not so challenging and appealing character roles in big budget Hollywood films. One of them as the main villain in the live-action Phantom movie from 1996. Which I personally think it is a shame because he deserves to be a much bigger star and he has charisma and personality and the way he delivers his lines draws audiences in. It seems that when he is in a big Hollywood movie, amongst the more established names on the bill, he is overlooked but in a B-movie as the main star, he really does shine.

And of course, I really enjoyed Dead Heat, which he co-starred alongside Joe Piscopo. He kicked ass in that fun little film and here, Williams gets to do the same thing.

The action scenes and stunts are not bad, although there are no real surprises. I did like the part where Thomasson uses a yo-yo as a weapon but I didn't care for the niece or her boyfriend that much enough - although the scene where she discovers he was a member of the gang who killed her dad, was good, and I was glad she got her comeuppance. But the middle of the third was sagging The climactic showdown in a motor mechanic class where Williams fights Wong, in front of the other students, was a tad silly and yet also entertaining at the same time.

BD Wong plays the main villain, although he didn't really sell it to me. He is just too nice of a person to play that role and to do it well. Therefore, I thought he was the odd one out, although Michael Michele (who reminds me in some way to Vanessa L Williams) came almost close. She wasn't convincing as a fellow teacher and as a love interest for Williams, her part should have been a whole lot more imaginative. 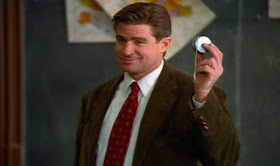 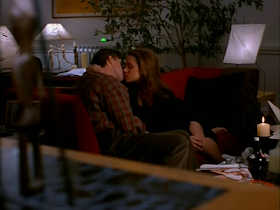 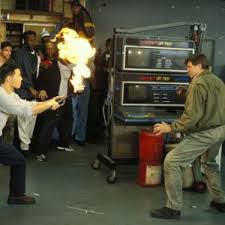 The action equivalent to Dangerous Minds, The Substitute 2 is no match for that film and yet, just like that film, it has a lead actor who possesses that extra quality to make it watchable in Treat Williams.

Although you can give me Dead Heat over this film.

As straight to DVD B-movie fare, The Substitute 2 is occasionally fun, though passable as a movie overall, it needs a few more improvements, and the performances and script, but for Treat, is not that great. If you do watch, keep expectations to a low but also watch and enjoy this film for his performance, more so than for any other reason.