It's not easy being funny and being able to make others laugh unless one is naturally funny or born with a funny bone in them. Yet even by carving out a career doing stand-up, with their skills and talents they have honed, they can use that to further their careers, especially in making the transition to becoming an actor.

Stand-up comedy is the stepping stone for any would-be and gonna-be movie actor. It also means a much wider audience, or be it the general public get to see more of their talents on show, which would usually be restricted to or only confined to the comedy clubs and circuits.

To qualify for my list, they must have starred in at least 2 or more films or shows that I have enjoyed. Also excluded from this list are actors and talk show hosts who initially started out or starred in comedy films, only to later become full-time fully-fledged or predominantly dramatic actors (Tom Hanks, Michael Keaton).

These are my 10 favourite comedians turned performers on the big screen in order from 9 to 1, my all-time favourite. And as I always say with all my choices, these are personal and subjective.


Simon Pegg - After winning over audiences at home in the UK on sitcom Spaced, it wasn't long until Americans and the wider world got to see what Pegg can do on the big screen, and why he is lauded by his fans in Britain. Shaun of The Dead and Hot Fuzz are two examples of films that take the Hollywood style of movies and intersperse it with some British flair. Pegg is also a comedic actor who manages to rise above the material that is given by displaying a range and sense of delivery in his performances that is not typically seen from other comedic actors, particularly British comedic actors. 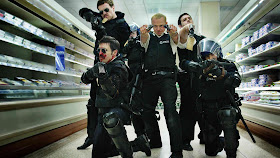 Jamie Foxx - born Eric Marlon Bishop in Texas, chose the surname Foxx as a tribute to the comedian Red Foxx. He first appeared on In Living Color alongside Jim Carrey and the other Wayons Brothers and sister, Kim. Jamie's movie debut came in Toys in a supporting role along with Robin Williams. After a successful 5 season run on his self-titled sitcom, The Jamie Foxx Show, up to 2001 he turned his attention to being a film star. After his star turn in Ray, his follow-up efforts have been a mixed bag, although I did enjoy Collateral. That, along with Jamie's musical abilities as a singer, makes him no one-trick pony. 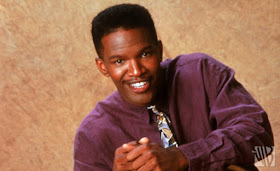 Chris Farley - it's a shame his career and life was cut short due to an overdose because in watching Chris Farley, he had the potential to become as successful as say, Mike Myers and Jim Carrey. Loved Beverly Hills Ninja, was good in Tommy Boy although I was a tad disappointed in that film. His penchant for physical comedy had me laughing at times. Suffice to say, Farley, despite his short-lived time, made quite an impression on me. 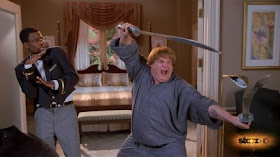 Mike Myers - just to show that Jim Carrey wasn't the only Canadian comic on the block, Mike Myers established himself as a stand-up performer, whilst also creating two memorable cinematic comedy characters in Wayne from Wayne's World and Austin Powers. His odd physical movements, silly voices and improvisational ability, as well as selling characters that audiences can root for, whilst still making us laugh, makes him a top draw. 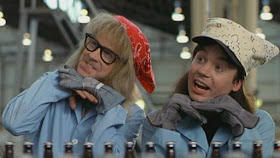 Leslie Nielsen - the 1980s and to some extent 1990s king of physical comedy, Nielsen's brand of slapstick and deadpan humour is akin to that of Rowan Atkinson's Mr Bean character, where Nielsen's characters are oblivious and complicit to the absurd and amusing things that take place around him. Though Airplane! was his first major comedy, he had always shown an interest in comedy. He followed it up with further parodies the Naked Gun films, Repossessed, James Bond-like spy comedy, Spy Hard and Wrongfully Accused. 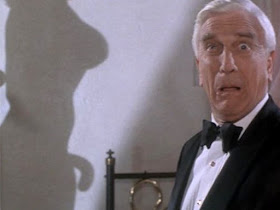 Will Ferrell - one of the members of the Hollywood ''frat'' pack, made up of a generation comedic actors and performers who emerged in the late 1990s and early 2000s, Will Ferrell first got his big break on the movie scene with subsequent appearances on Austin Powers, A Night At The Roxbury, Austin Power: The Spy Who Shagged Me & Zoolander. His debut came in Old School in 2003 and by the 2000s, he became the decade's biggest comedy star.

Notable Favourites: Anchorman: The Legend of Ron Burgandy, Megamind, Blades of Glory, Elf, The Other Guys 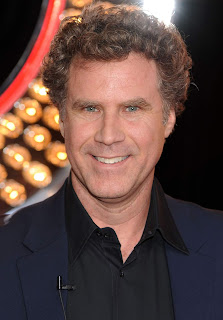 Danny DeVito - DeVito gained prominence on the sitcom, Taxi as a disgruntled dispatcher, Louis that led to Golden Globe and Emmy award wins. Like Robin Williams, after Taxi's end, DeVito went onto feature film acting and starring in lucrative '80s hits Romancing the Stone, sequel The Jewel of The Nile, Throw Momma From The Train and Ruthless People. He's very good at playing slimeball like characters. But it was his surprising- yet impressive performance as The Penguin alongside Michelle Pfeiffer's Catwoman in Batman's Returns that showed his range as a character actor.

Though generally a comedy actor, Danny has proved time and again how convincing he can be by playing it straight in dramas and thrillers. 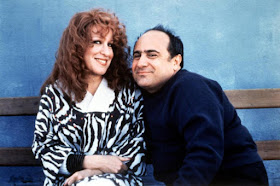 Jim Carrey - rubber-faced Jim Carrey already had a supporting role in 1988's Earth Girls Are Easy alongside his In Living Color co-star Damon Wayons. He then made his mark on Fox's In Living Color sketch show and it led to starring roles in Ace Ventura, The Mask, Dumb & Dumber and Liar Liar. Though Carrey was deemed the most bankable comedic actor of the 1990s, in truth, he did star in fewer films than Robin Williams during that period.

His subsequent film offerings have been less than memorable but had he had more film roles and quality ones, I could have definitely seen him as the next Robin Williams. 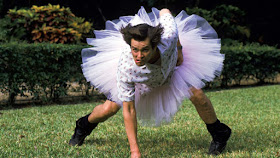 Eddie Murphy - Richard Pryor may have been the all-time African American comic, but Eddie Murphy had gone one better than Pryor insofar as his movie career goes. Despite a few blips during the 1990s and beyond, Murphy's ballsy and motormouth style made him synonymous in action roles in 48 Hrs and the Beverly Hills Cop series. Thus, proving that as a comedic actor he has the ability and believability to play an action role, as good as he does. 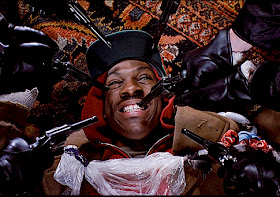 Robin Williams - during four seasons on ABC's Mork and Mindy, Robin Williams had already made his mark as a TV actor, playing the titular alien character, Mork. But it was his movie career whereby he had made his biggest impact and success, starring in hit movies such as Good Morning Vietnam, Hook, Dead Poets Society, Good Will Hunting, whilst supplementing these with his comedic turns in Mrs Doubtfire, The Birdcage and as the Genie in Disney's Aladdin, where Williams really demonstrated his versatility, and at times energetic and sure-fire improvisational style as a performer. My favourite Robin Williams comedy era is from 1978 with Mork & Mindy up until the late 1990s.

He is capable of playing it straight in a dramatic role, but also finds the time to not take everything seriously and to have fun through his Comedy films. 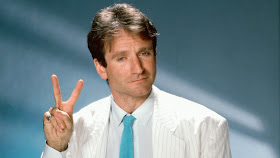