Plot: In Manhattan, a bike messenger picks up an envelope that attracts the interest of a dirty cop, who pursues the cyclist throughout the city 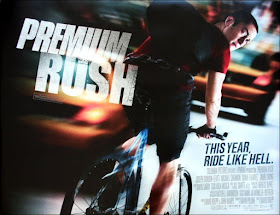 'Peddle To The Meddle'

Premium Rush joins 1986 film, Quicksilver as the other premiere and token action - thriller based movies centred around the theme of cycling and some wacko bad guy, who tries to thwart their attempts.

Starring the excellent Joseph Gordon-Levitt, former child star now established adult actor, 2012's Premium Rush went unnoticed by many and had underperformed at the box office. Watching it on TV, I could see to it that not only is this film an underrated gem, this is one of my favourite 2000 and post-2000 movies, ever. And yet there aren't so many of them on my list.

Levitt is Wilee, like Wile E Coyote from the Roadrunner cartoons: a bicycle courier who travels and works in and around New York, dropping off letters and packages at various offices and places. One of his tasks involves delivering a package from a student at Columbia University/College all the way to Chinatown, all within an hour and a half. Problem is, Wilee is being hotly pursued by a corrupt cop who has his eyes on the package. And with that, from the first moment Wilee and the cop first meet up, the inevitable chase begins.

Films involving four-wheeled cars are all the range- from the ever famous Fast and The Furious series, Pixar's Cars to Smokey and the Bandit. But films involving two-wheelers are few and far between. Notable mentions include Torque, Quicksilver, BMX Bandits to the forgettable Biker Boys.

Gordon-Levitt exerts a commandable onscreen presence as Wiley as he peddles and speeds his way past numerous hurdles, obstacles and eluding all manner of characters, be it the love rival of his girlfriend, the bent cop, the other bicycle cop. His character is both easily appealing, likeable and one I can root for. The supporting characters were as good as Levitt's Wilee and the action scenes and set pieces almost beggar belief at times. It was so entertaining, action-packed with a few twists thrown in. There are not many movies which are quite as entertaining and jam-packed with moments, and all within the film's run-time. I loved every minute of it.

Though I was a teensy bit taken back by the sketchy depictions of the Chinese characters as triad gang members (and that Jamie Chung's character has a dodgy Chinese accent. Personally I thought that character should have been Chinese American). And yet those issues didn't hamper my overall enjoyment of Premium Rush.

Premium Rush is everything Quicksilver ought to have been as a film and how a film about cycling and bikes and bicycles should be conceived in a highly energetic, fast-paced and entertaining fashion; the atmosphere is a whole lot better with better settings, the bike stunts and set pieces are bolder and bigger & deft-defying and the fact that it looks so much better.

I think the ones who over analyze this film too much will not enjoy it as much. Premium Rush, for me, is a film that I tuned into as the premise sounded intriguing but also for its entertainment value, the action set pieces and scenes which didn't feel to me as they were overdone. The story was engrossing with some interesting twists. As long as this film provided all that and it kept my eyes peeled and it entertained me a great deal, then that is all I could ask for in a film of this type. And Premium Rush did just that.

The plot may be minimal, the pacing may be a little too fast for some people to follow (though personally speaking, it was just right), it might also be one extended set piece, yet it was executed in such a way it was one that didn't send me to sleep or bore me to no end.

Premium Rush knows the type of movie that it sets itself out to be; that, and it has an innovative and somewhat creative spin to it. 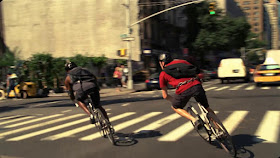 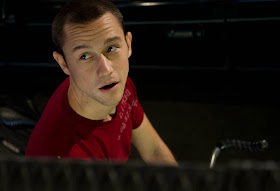 Premium Rush may not be thoroughly deserving of full marks. But I personally loved every single minute of it; there wasn't a dull moment throughout and I wasn't just pleasantly surprised but I was in awe at some of the bike stunts that were displayed and the performances were the icing on the cake as well. This is the most entertaining and thrill-packed 90-minute movie I've sat through in a long while.

If you want something not too light and breezy, doesn't require much brain power but also it keeps you on the edge of your seat, Premium Rush is it.

This is the post-noughties version of Quicksilver - only way better in every single department.