Plot: Axel Foley returns to Beverly Hills to help Taggart and Rosewood investigate Chief Bogimil's near-fatal shooting and the series of alphabet crimes linked to it 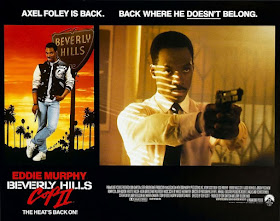 1987's Beverly Hills Cop ll was the highly anticipated follow-up to the hugely successful Beverly Hills Cop. Four years on, producers Jerry Bruckheimer and Don Simpson decided to lure in British director, the late Tony Scott (and brother of fellow director Ridley Scott) to help inject some of his style and flair into the film.

The problems that they didn't manage to iron out however were Brigitte Nielsen's bad girl villain, the characterisations of the characters and the slightly iffy- and I say iffy tone the film evoked. It also rehashes the same plotlines of the first film, with Detective Bogomil being gunned down instead of Axel's friend (in the third film, it's Axel's boss), Axel, Taggart and Rosewood going to a strip club and Axel running foul of the main head of authority, who is not a fan of his antics.

It's slightly more action-oriented than the prequel, although the story should have taken more of a backseat and for Tony Scott to allow Murphy to do what he did in the first film and let his humour have more of an impact on the film. Yet the script places more focus on the action than on the comedy - and for a film billed as an action-comedy, Tony Scott has the action nailed down to a tee. His visual style is stylish, sleek and glossy from an aesthetics perspective; the cars, the outfits, the way the film is shot and produced. It is on a whole another level to Beverly Hills Cop in that respect. But the film has little or no place for comedic set pieces, lines. And it resonates more as a Sly Stallone or Arnold Schwarzenegger type of action movie.

The scenes where the alphabet bandit raids the jewellery stores, I thought the way this was conceived and played out was a little too cartoonish with that jarring music playing in the background.

Beverly Hills Cop ll tends to be or tries to be like 48 HRS. Perhaps that was Tony Scott's idea, but either way, the franchise just doesn't work as a straight-up action movie, because the Beverly Hills Cop films have never been pure action films but action comedies. The third film suffered from the comedy (which was also cringing in places) overriding the action and so with both sequels, the overall tone is inconsistent and patchy. It is so dissonant, you are laughing one minute, the next you have a serious look on your face.

With Brigitte Nielsen, she ought to have been the central bad guy, instead of functioning as a femme fatale- like character. Although she came across as a walking, talking Blonde peroxide bombshell without much substance. She was like a female human version of the Terminator; almost void of range and emotion. Plus, she was also too serious. I wouldn't have had Jurgen Prochnow in it at all. His character uttered like 2 lines or so of dialogue. The villains are all cardboard-like, asinine with no resounding qualities to speak of. I also hated the Harold Lutz character, a politician who is always whining and getting angry and acting as the jerkass of this film.

Fortunately, Beverly Hills Cop ll remains watchable, because of Eddie Murphy, who once again steps up to the plate as Axel. As well as John Ashton and Judge Reinhold whose presence throughout is worth sitting through this film for.

The score by Harold Faultmayer is slightly better in this film than the previous outing, with more electro synth-pop blasting out of the speakers. I love the original motion picture soundtrack. 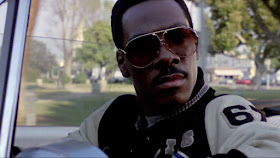 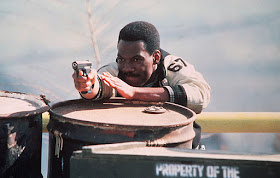 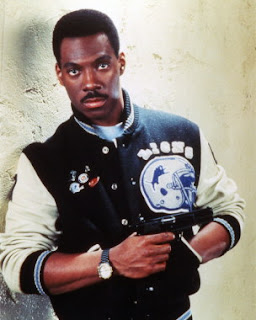 Twice the action, with bigger explosions, more bullets, it seemed like Tony Scott wanted to go bigger, which he did so. And yet the sequel is less fun and light-hearted than the first film.

Although there were occasions where moments and some scenes and some of the characters' behaviours and reactions felt forced. And in doing so, that took away from the movie's strengths and plus points. I was also a tad disappointed that the comedy became an afterthought and there wasn't more of it, but not too much that it makes the film silly, like in Beverly Hills Cop lll.

Patchy, a bit rough around the edges with an irregular tone, Beverly Hills Cop ll is still worth seeing, despite those issues.