Plot: A group of heavily armed hijackers board a luxury ocean liner in the south Pacific ocean to loot it, only to do battle with a series of large sized, tentacled, man-eating sea creatures who have taken over the ship first 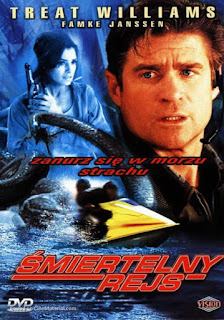 Having being impressed by Dead Heat, I was looking forward​ to sitting through another Treat Williams action B-style movie, and that perhaps I would get another interesting story to go along with the special effects and action sequences. Well, unfortunately, Deep Rising just didn't have a compelling or interesting story to draw me into the movie fully. Thus, I was left somewhat underwhelmed and a tad disappointed.

Deep Rising is a less than scary version of The Abyss meets The Poseidon Adventure and Under Siege with Steven Segal: a group of mercenaries are on board a luxury boat, only to find themselves pitted against a horde of large tentacled sea creatures. It's Aliens on a huge boat - but without some of the memorable crew members and that extra something to make it a really great film. The main man in Treat Williams wasn't too bad in this one, and plays it seriously, yet he wasn't as big of a bad ass as he was in his other B-movie action offerings. But for the exception of the guys, Famke Janssen who plays a jewel thief, mainly existed as the lone female cast member and was shoehorned into the film, just for the sake of it.

It's not what I consider to be one of those so bad it's good type of movies, especially a movie such as this one. But rather that the premise sounded okay and the action and the effects are overly decent that make it sort of worthwhile; yet the story and the script just wasn't very entertaining or interesting to sit through.

There are major plot holes with this sea monster film: we get no insight into the background of the creature. Where did it come from? What is its history or origin, if any?

The film doesn't really have any stand out good guy heroes- no one has an ego bigger than the other, and whilst that is a good thing, characterisations all-round are lacking and but for Treat, everyone else was forgettable. The plot is predictable as one expects. However as a B-movie, Deep Rising certainly knows it is that, despite the huge budget it took to make it. Thus, it wasn't made in mind to break new ground, but to provide fans of this particular movie genre, something slightly different. 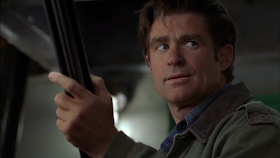 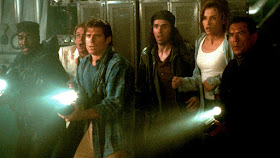 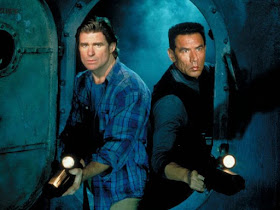 As far as this film goes, it's as generic and formulaic and whilst it has its moments, the screenplay and actual narrative wasn't very interesting enough. The story just never gripped me and pulled me in and because it is formulaic, besides the clichéd plot, the longer it goes on, the more repetitive it feels.

The performances are not bad, as a whole, but the screenplay is at fault that Stephen Sommers, who went on to do The Mummy, did make it a tad too long. He just didn't do much to it to make it stand out as a film on its own merits.

I came away from this film thinking what might have been and though some will say Deep Rising is worth seeing just once, I will definitely give it another spin some other time, and hopefully afterwards, I will feel more positive towards it.