Plot: When terrorists seize control of an airliner, an intelligence analyst accompanies a commando unit for a midair boarding operation 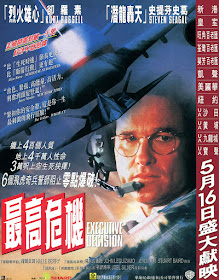 "For An Action Thriller Film, There Is A Distinct Lack of Action In It''

Executive Decision came out in the midst of other big-budget action movies such as Eraser to relatively little fanfare and audience interest. I had heard of Executive Decision, but the plot didn't strike a chord with me and in watching it in its entirety, I could see why the film didn't make a great impression on me: the so-called action element was underplayed and didn't blow up in a major way.

The plot of the film has Middle Eastern terrorists taking over a plane full of passengers and some cabin crew in return for the release of their leader. The bad guys even place a bomb and fill the plane with poison nerve gas. A crack team is sent to defuse the bomb before the situation gets any worse; in short, it's Die Hard on a plane, much like with Air Force One starring Harrison Ford. Yet the main action of this film doesn't occur until the last half and it lets rip with crashes, gun blasts, people fighting.

Steven Segal's character gets killed off earlier on, and whilst I wasn't too bothered at first by this plot twist, without his presence, not only did it meant Kurt Russell had to pick up the slack. But that the other so-called badass tough mercs weren't as appealing. Had Segal's character survived and played more of a role in the film, it would have upped the excitement factor, no doubt.

Kurt did his thing and whilst his role requires a less macho gung-ho attitude, he still leads the good guys to victory. He has built up quite a reputation in films such as Escape From New York, Big Trouble In Little China and Tango & Cash as the type of action hero actor who relies on guts, a rough looking image physically and a never-say-die attitude. But here, he downplays it and whilst that is interesting to see, the rest of the film is less frantic and slow-paced.

Written by the team who penned Predator with Arnold Schwarzenegger, the pacing of events in that movie was overlong and in trying to build up tension in that movie, this was something they have been neglecting throughout this entire film, but for the opening scene.

The casting is okay and the likes of BD Wong, Halle Berry, John Leguizamo turn in respectable performances. But Oliver Platt was the worst and most forgettable for me. However, they were let down with the story being dragged out for ages and plus, it was not very entertaining either. How can a film with a terrorist plot with a star such as Kurt Russell, who is renowned for action hero roles in Escape From New York, Big Trouble In Little China and Tango & Cash, be such an excruciating bore? That is something I want to know.

The last 25 mins of the film were far more interesting than the rest of it. I found the pacing of the film to be very slow and arduous, racking in at a gruelling 133 minutes. The story was so excruciatingly dull and dreary, there was no spark added to ignite it. It was extremely slow, so slow the longer it dragged on, the more impatient I got and it made it difficult for me to concentrate on the film. However, the ending with Kurt's and Halle's characters was nice. Kurt Russell, though his role was not as good as in many of his previous efforts, and Halle Berry's scenes made it watchable-despite the threadbare and half-baked script. 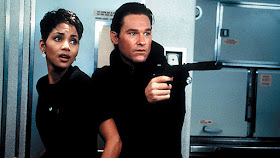 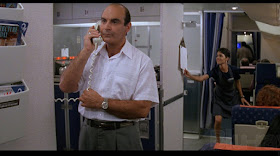 Executive Decision is one overlong film that is also stale when it comes to the narrative. Given that the middle of the film is longer and duller than the first and last 20 mins tell me that they really underplayed this movie. It's a shame really, as I liked the casting. Yet there is also so little action, it makes this film so underwhelming.

It didn't matter that the plot was generic as in every other action film - I was more let down by the amount of action. For long periods, I was expecting so much of it. But truthfully, there wasn't more action here, and coupled with exceedingly slow pacing and a tedious screenplay, Executive Decision flattered to make the type of impression I'd come to expect from an action thriller movie of this type.