Plot: A man afraid to fly must ensure that a plane lands safely after the pilots become sick 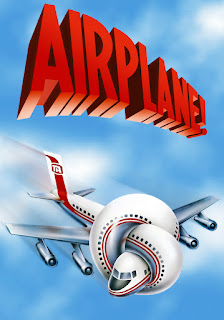 'Laugh- A- Minute Riot Of Disastrous - Yet Amusing Proportions'

A parody of disaster films, Airplane! sends up an altitude- I mean a multitude of jokes, laughs and fun galore, without over-relying on flatulence jokes, explicit references to naked body parts and strong profanity: a trait that is, unfortunately, the norm for today's comedy films, and it does so with efficiency and success.

An ex-pilot now taxi driver who just broke with his girlfriend, an air stewardess, has an irrational fear of flying and ends up following her in an attempt to rekindle their romance and winds up buying a ticket for the next flight. After the pilot is taken ill, Ted has to overcome his fears by taking control of the plane and landing it and its passengers to safety.

The jokes and funny scenes & lines come flying in, thick and fast: two girl scouts fighting in a bar, the Black guys speaking in ebonics or be it 'jive' and there are subtitles appearing on screen (!), the white woman speaking jive, the karate-kicking pilot in the airport! Oh and let's not forget the inflatable pilot and the odd blowjob scene! Comedy-wise, it has more in common with Mel Brooks's offerings such as Blazing Saddles, Robin Hood: Men In Tights and Spaceballs and the film covers pretty much almost every type one can think of: slapstick, physical, one-liners, surrealist, visual and sight gags you name it, it's all here and these are all scattered throughout the movie.

There is a wittiness and deadpan reaction to the absurdities of the situations from the characters that are not just amusing to see, but also one that doesn't come across as forced, just for the sake of comedy. The comedy is biting and sardonic, the delivery and timing of the comedy hits the spot perfectly, the jokes may be juvenile to some people; for me, a lot of it is more tasteful than the stuff that has been going around in comedy films of the past 8 years or so. There is even a love subplot involving Ted and Elaine.

Over 30 years on, it still has not diminished its appeal and although a lot has changed since 1980, the film still looks great and is a lot of fun in places. The trio of Jim Abrahams and the Zucker Bros, Jerry and David have mastered, as well as crafted what is (arguably) the epitome of spoof movies and have set the bar so high that so few have managed to reach (Naked Gun did so by retaining Abraham's & the Zucker Bros essence of what makes a spoof film work - and yet the least said about the Scary Movie series, the better, personally speaking).

The best version of this film is the one that is unedited with all the naughty bits left intact. 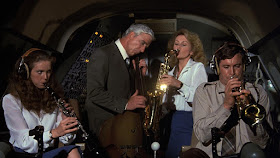 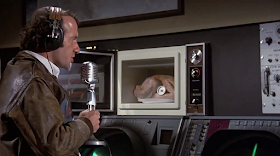 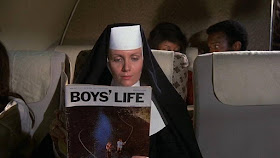 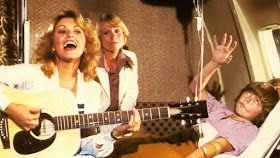 This zany, madcap flight-based movie needs to be passed on to generation to generation. It's off-the-wall as it can get without plumbing down to degrading lengths when it comes to the humour, but it is also one you need to revisit and rewatch to be able to get and understand the jokes and all the silliness that takes place.

Loaded with consistent laughs and a memorable turn by Leslie Nielsen which he followed up with the Naked Gun films, the Zucker Bros and Jim Abrahams have delivered a grade-A comedy satire that rarely, or be it doesn't fail.

Spawning an entire genre of parody films, Airplane was the first and being the first, it did every right at the first attempt.

Probably the ultimate slapstick comedy ever produced and whilst some people will think Airplane is a tad overrated, it is a type of satirical comedy that sadly wouldn't get made today in today's Hollywood climate.